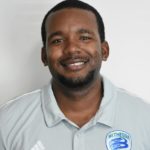 About Trey: Coach Livingston is considered to be one of the top young head coaches across the country.He currently holds a USSF National ‘A’ Coaches License, a USSF ‘National Youth License’ Certificate, an NSCAA Premier Diploma, and a NSCAA Goalkeeping 3 Diploma.

Trey was named into the NSCAA National 30 Under 30 Program and was honored by the NSCAA as the National JUCO Assistant Coach of the Year for his work with Montgomery College where he has served as the club’s Assistant and Head Coach, a position that he still holds. Prior to his work with Montgomery College he served as the Director of Soccer Operations for Georgetown University.

As a player, Trey was a four-time All Academic Team member at Howard University. During his time with Howard the club was ranked in the NSCAA’s Top Ten in the North Atlantic Region.

Trey has a Bachelor’s Degree in Leisure Studies from Howard and a Masters Degree in Sports Management with an emphasis in Strategic Marketing, Communications, and New Media from Georgetown.