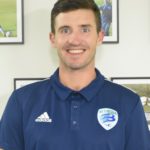 About Trevor: Coach Martin holds a USSF National  ‘B’ Coaches license. He attended George Washington University earning a Bachelors’s Degree in Psychology with a Minor in Exercise Science. As a four-year starter for the Men’s Soccer Team the Colonials won two Atlantic 10 Championships and was named captain his senior season. In high school, Trevor was a captain and starter for the Bethesda-Chevy Chase high school and scored the game-winning goal in the 2001 Maryland State Championship. He received First-team All-County honors, was a Washington Post All-Met Honorable Mention, and an All-Chevy Chase Gazette honoree.

Coach Martin has been working with Bethesda SC since 2005 and has been instrumental in the Youth Development Program’s success. Trevor has helped build Bethesda SC’s YDP Program into one of the top programs in the country, developing numerous MLS Players & over 250 Div. I, II, III players for college.