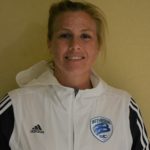 About Noelle: Coach Keselica holds the distinction of having both played and coached for BSC. She joined the BSC coaching staff after having served in a similar capacity with Ellicott City Soccer Club. She also currently holds a USSF “E” Coaches License.

Her experience with the club runs deep having won multiple titles and awards as a youth player with the Bethesda Fury. As a member of the Fury she was a nine-time Maryland State Cup Champion, a two-time Region I U.S. Champion, and won the 2001 U.S. National Championship. During her high school career, she was a two-time Youth All-American and was a four-time member of the Washington Post’s All-Metro First Team. At the University of Virginia, Noelle was a member of the 2004 side that won the Atlantic Coast Conference Tournament and in 2005 she was an NSCAA All American. She featured extensively for the United States Women’s National Team through multiple age levels and was a member of the U21 2006 side that made the finals of the Nordic Cup. Professionally, she played for Sky Blue FC in the Women’s Professional Soccer and Balinge IF in Sweden.

She currently holds a USSF “E” Coaches license and received her Bachelor’s Degree in Sociology from the University of Virginia.