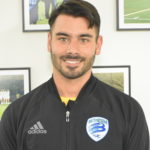 About Nicolas: Coach Santeriano currently holds a USSF National ‘C’ Coaches License and has been with the Bethesda program since 2016. He also currently has his Level 1 Coaching Certificate from the National Federation of State High School Associations (NFHS), and is an Olympic Development Program Coach for the Maryland State Youth Soccer Association.  Before his work with BSC, Nicolas was the head coach at Urbana Eagles FC (2016), John Paul Middle School (2014), MSI (2014), SAM Soccer of the Maryland Soccer Foundation (2014-2016), and Soccer Shots (2014-2015). He was also part of D.C. United’s U-23 coaching staff during their 2014 USL PDL season. During that same time, he also served as a Youth Academy Scout for the club.

Nicolas played high school soccer with Club Atletico San Miguel in his hometown of Buenos Aires, Argentina. With San Miguel, he won the 2003 Regional Championship and was a runner-up in 2002 and 2004. He has an Associates’s Degree in Business Management from Montgomery County College and a Bachelor’s Degree in Accounting from the University of Maryland.