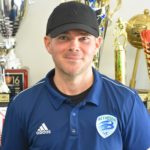 About Kevin: Coach Layton joined the BSC program for 2019-2020 after over a decade of coaching youth and collegiate soccer in the region. He will be coaching Bethesda’s U12 and U15 ECNL sides during the fall.

Prior to joining Bethesda, Kevin served as the Head Coach of the MRM Coyotes, which won over 20 top-flight championships including the Bethesda Premier Cup and had 19 players go on to play NCAA Division I soccer. He would later go on to serve as the Director of the Girls Youth Academy at MRM, working with players ages 8-13. He has also served as the Girls Varsity Assistant Coach at Good Counsel High School where his side won six Washington Catholic Athletic Conference (WCAC) championships. At the collegiate level, Kevin has previously worked as a Volunteer Assistant Head Coach and Interim Head Coach at George Washington University.

In addition to his work as a coach he is also the owner of MEGA Soccer, a soccer training company based out of the Montgomery County area. Before starting his coaching career Kevin played college soccer at Towson University and was a member of the Northern Virginia Royals PDL team in 2003 and 2004.