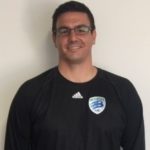 About Derek: Coach Biss is the Director of Goalkeeping for Bethesda Soccer Club. He also currently holds a USSF National ‘A’ Coaches License, a USSF ‘National Goalkeeping’ License, and an NSCAA Premier Diploma.

As a scholar-athlete, Coach Derek played goalkeeper at George Washington University while being part of two Atlantic 10 Conference Championships and being named Conference Tournament Most Outstanding Player in 2004. Biss allowed just one goal in three games and tying a tournament record with two shutouts as the Colonials won their second A-10 title. Biss then posted another clean sheet against North Carolina in the first round of the NCAA Tournament for GW’s second-ever postseason victory. He finished his junior season with six shutouts, the most by a Colonials’ keeper since 2000. A member of the men’s soccer team from 2002-05, Biss ranks second all-time in GW’s history with 274 career saves.

As a coach, Derek previously served as Georgetown University’s Goalkeeper. He is responsible for developing as well as implementing the team’s goalkeeper curriculum.