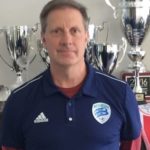 About Dave: Coach Ungrady joins the Bethesda Soccer program after an extensive career both on the sidelines and in the press box as a coach, player, and journalist. He currently holds a USSF National ‘D’ Coaches License and has previously coached at Loudoun Soccer, D.C. Stoddert Academy, and St. Stephens/St. Agnes High School.

In addition to his work as a coach, Dave has worked for more than 30 years as a career journalist. His work has appeared in the Washington Post, the New York Times, and USA Today, and on ESPN, CNN, NBC, and Voice of America. In 1997, he served as the play-by-play commentator for D.C. United. He is the author of four books on sports and is the founder of the Born Ready Project, which teaches life skills to teenagers and young adults. He is a school teacher in the Loudoun County Public School system.

Dave is a graduate of the University of Maryland-College Park, where he received a Bachelor’s Degree in Journalism and was a member of their soccer and track and field teams. After his collegiate career ended, he played professionally for the North Virginia Royals in the United Soccer Leagues D3 Pro League.  Dave is also a member of the Notre Dame High School (Trenton, N.J.) Athletics Hall of Fame.