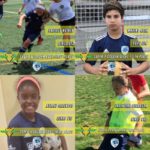 This week, Super Y announced the winners of their Golden Boot awards for the top goalscorers in this year’s competition. In the girl’s Golden Boot race, Presley Weiner finished first with 22 goals, followed closely by Aylani Callwood and Valentina Perrotta, who tied for third with 18 goals each.
On the boy’s side, congratulations to Maximos Alem who finished fifth in the Golden Glove race with 6 clean sheets.