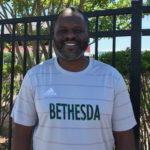 Albert Oni is a native of Silver Spring Maryland where he grew up playing soccer at the club, high school, college, and professional levels. After college, Albert joined the Washington Warthogs. Albert completed his playing career with the Baltimore Blast. Albert has coached girls on the ODP, club, WAGS, and Region 1 levels for over 12 years. He was the head coach of Mercy HS varsity girls for 8 years, where he was named Baltimore Sun’s Coach of the Year in 2009. Albert was the head coach of the ASA Chesapeake Charge Womens’ WPSL team from 2010 to 2012 earning WPSL East coach of the year in 2011. He was an asst coach for the Towson Women’s soccer team from 2010 to 2012. Albert is currently the head coach for the Severn School girls varsity soccer program in Severna Park.

Oni has been training local youth players and teams for over 20 years. He focuses on technique, a tactical understanding of the game, and team concepts in a fun and productive learning environment. It integrates teamwork with special attention to individual players.