Many of our players continue their soccer careers once they graduate from Bethesda SC in college. Understandably many players concentrate on what happens on the field in the recruiting process, however, college recruiting isn’t just about your play, there are many other elements to the recruitment process other than a player’s performance on the field.

Being a successful college student-athlete requires a well-rounded individual. Primarily they must be able to balance the academics involved while performing on the field. The level of play raises when a player reaches the college level but so do the academics. If during the recruiting process you stand out on the field but the GPA isn’t at a similar standard it will give the College Programs questions because handling both is critical.

When players join a college program, they are a representation of themselves but also of the program. How an athlete conducts themselves off the field is imperative. Most of the day is away from the coaching staff. Between classes, meals, studying and free time in between, college athletes need to be responsible and have high character. When programs are going through the recruiting process they are always watching. How do players act when they are off the field? Do they look engaged when they are not playing? Are they supporting their teammates? What are the player’s reactions if something isn’t going their way? 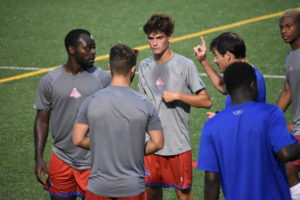 You are going to be in communication with many programs for a variety of reasons, such as displaying interest, following up on a conversation, and sending film. If you are sending an email, make sure it is well crafted. You aren’t communicating with a friend, so remove any slang. Make sure everything is spelled correctly. Make sure you use the correct coach’s name; you will be sending emails to several programs and so make sure you are addressing the correct coach. When you are on the phone with a program, TALK! Being on the phone provides you with an opportunity to display your personality. When on the phone act engaged, ask questions and contribute to the conversation.

In the end, you hope that you are being recruited by programs that you would like to play for, but remember you are recruiting them as well. If a program reaches out to you, that shows that they have an interest. You need to do the things necessary to reciprocate. Being a player of enough quality is extremely important, however, usually, it is the little details that separate players in the end. Be as good as you can with your personal details, and if you remember college recruiting isn’t just about your play, but what you bring to the table as a player and a person, you will be better off in the recruiting process.