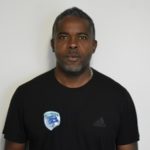 About Wendell: Coach Regis has been with the BSC family for close to a decade primarily working within the club’s Youth Development Program and coaching the Bethesda Blue teams.

He played professional soccer from 1996 – 2007 in the Major Indoor Soccer League with the Philadelphia Kixx, Cleveland Force, Hershey Wildcats, Harrisburg Heat, and the Baltimore Blast. He is a member of the Blast’s 2003-2004 and 2005-2006 Championship sides and was named to the 2003-2004 MISL International All-Star Team. He also appeared international for Trinidad and Tobago’s under-23 National Team. In addition to his professional exploits, Wendell featured prominently for Howard University, where he also received his Bachelor’s Degree in Marketing.

In addition to his coaching experience with BSC, Wendell has also coached Riverdale Baptist High School and Potomac High School. He currently holds a USSF “A”Coaches License and an NSCAA Goalkeeping Level 1 Certificate.

In addition to working at Bethesda, Wendell is an international scout for the Trinidad and Tobago Football Association(TTFA) and Assistant Coach at Howard University.