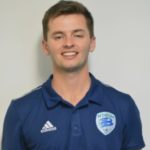 Coach Tyler is in his second full season as a BSC head coach after joining the club at the start of the 2019-2020 season. Tyler has been with Bethesda since he was seven years old. His understanding of the club’s goals and expectations is high. He has spent many summers with the club working at camps and will continue for summers to come. Tyler graduated from Catholic University in the spring of 2019, receiving a Bachelors’s Degree in Elementary Education. He currently holds a USSF National ‘D’ Coaches License.

As previously mentioned Tyler is an alumnus of the Bethesda Soccer Club. After his youth career, Tyler went on to play four years at Bethesda-Chevy Chase High School and then four years at Catholic University of America. At BCC, he received honorary mentions from The Gazette and helped the team to multiple competitive seasons. On both teams, Tyler was named to leadership roles and helped the younger players become more accustomed to the team.