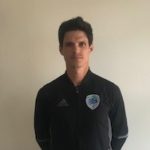 Pierre joined the coaching staff in the 2021-2022 season. As a Bethesda Soccer Club player alum, Pierre went on to play DIII as a 4-year starter at Swarthmore College. There, he won two conference championships, an ECAC championship, and featured twice in the NCAA round of 16. He also played semi-professional soccer for NW London in England.

Pierre started his coaching career with two amateur teams in the Boston and London area, before moving back to DC and rejoining BSC as a coach.

Pierre obtained his coaching ‘C’ license. He has a Master’s Degree in Business Administration from the London Business School and a Bachelor’s Degree in Economics from Swarthmore College.