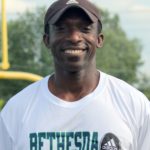 About Phillip: Coach Gyau is a former U.S. Men’s National Team (’88-‘90) who earned six caps and was a Player-Coach for the U.S. National Beach Soccer Team.

At the club level, Coach Gyau has taken his teams to several Maryland State Championships and a Regional Championship while developing several players in the U.S. Soccer Residency U17 Program.