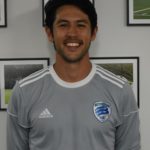 About Patrick: Coach Mehlert holds a USSF National “B” Coaches License and has earned his NSCAA Pro Development Certificate, NSCAA Goalkeeping Certificate, and an NSCAA Development of Technical Player Diploma. He has worked with Bethesda Soccer in multiple different positions since 2009 and is currently a head coach in the club’s Youth Development Program.