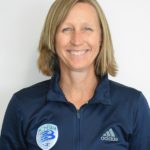 About Nancy: Coach Rohrman has an outstanding coaching resume and playing career that spans over 20 years. Nancy has been a part of numerous State and Regional Championships at the club level, while developing and  producing players who have gone on to represent State and Regional ODP Teams, as well as US Youth National Teams and the US Women’s National Team.

As a player, Nancy competed at the University of Hartford, where she was named All-Conference, All-Region, NCAA All-Tournament, and Conference Player of the Year, while guiding the Hawks to four consecutive NCAA Tournament appearances, including a trip to the Final Four her senior season.  Upon graduation, Nancy was selected to be a member of the United States Women’s National Team that participated in and won the gold medal at the 1993 World University Games. She was a member of the US Women’s National Team for two  years, and competed in four US Olympic Festivals, winning one gold medal.

At the club level, Nancy featured for SA United from Virginia which won three consecutive National Amateur Championships. She was also a member of the Maryland Pride of the United States Women’s Interregional Soccer League and was a key figure in their National Championship run in their inaugural season (1996). In 2008,she played with MYSC in the WPSL and was named Conference Player of the Year, after guiding them to the playoffs in their first year in the league.

Nancy currently holds a USSF National ‘B’ Coaches License and is a member of the Ohio North Soccer Association Hall of Fame and the University of Hartford Hall of Fame.