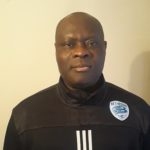 About Mustapha: Coach Minteh has over 20 years of diverse coaching experience at the High School, Select, and Classic levels. He has worked with Peter Bonde who is the former Technical Director for the Danish Football Association, is a member of UEFA’s Technical instructor’s panel, and was an assistant coach at the 2002 World Cup. Minteh’s coaching strength is the ability to guide each player to get better by focusing on technique, tactic, physiological, and physical aspects of the game.

As a player, Mustapha was capped for the Gambian National Team and served as their captain for multiple appearances.

Mustapha currently holds a state ‘D’ license, a USSF ‘C’ License, and an NSCAA Director of Coaching Diploma. He is also a member of the NSCAA.