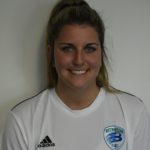 About Mikayla: Coach Krinetz joins the BSC coaching staff after an extensive playing career in the Maryland area. Before graduating from the University of Maryland-Baltimore County with a degree in both psychology and photography, she played goalkeeper. At UMBC she also served as the Vice President of the UMBC Student Advisory Committee and is a representative of the America East Student Advisory Committee. She is also a founding member of the Retriever Project, a student-athlete mental health initiative. She has previously coached at soccer camps at both UMBC and the United States Naval Academy. Mikayla played high school soccer at Broadneck High School and is an alumnus of the BSC program.

In addition to her work on the pitch, she volunteers at her local SPCA.