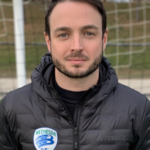 About Michael: Coach Edwards has been with the BSC program since 2016 and currently holds a USSF National ‘F’ Coaches License. In addition to his experience with BSC, Michael has served as a coach for the Clarksburg High School Varsity program and with Walt Whitman’s Junior Varsity team. He played three years of varsity for Paint Branch High School where he was captain for two years and helped the side reach the 4A State Championship title in 2005. In addition, he played three years of college soccer at Hood College. He received his Bachelor’s Degree in Education from Shippensburg College and is currently a sixth-grade teacher, and Head Coach at Julius West Middle School, as well as a Boys Varsity Soccer Assistant Coach at Good Counsel High School.