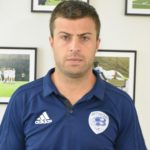 About Matt: Coach Ney has been at Bethesda for over 20 years, holds a National ‘A’ License from the United States Soccer Federation (USSF) and a Fluminense Football Club Coaching Diploma (Rio de Janeiro, Brazil) where he studied the Brazilian philosophy to understand the route to professional soccer. He has worked closely with Pierrot Labat, Girondin Bordeaux FC (world-class trainer and coach for Zinedine Zidane, Christophe Dugarry, and Bixente Lizarazu, learning his philosophy and ideas on the technical, tactical, and psychological development of the youth player. As a coach, Matt was named US Soccer Academy Coach of the Year, has won a Region 1 Championship, and Two Maryland State Cup Championships.

Ney played collegiate soccer as a forward at College of the Holy Cross where he was the All-Time leading scorer in school history, a Two-Time Patriot League Player of the Year (2002, 2003), a two-time All-New England Region Selection (2002, 2003), a four-time Patriot League All-Conference — 2nd team (1999); 1st team (2000-2002). He also received the Golden Boot Award for top scorer in US National Championships in 2000.

As an entrepreneur, he the is founder of Kakana an accessible first fitness platform for individuals with and without disabilities.