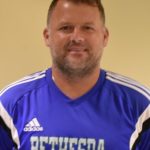 About Kert: Coach Mease holds a United States Soccer Federation (USSF) Coaching ‘A’ License. He played professionally with the CISL and the Washington Warthogs after a collegiate career at the NCAA Division I Robert Morris University.

As head coach of the Northwest Varsity Boy’s program for the past 21 years, Mease earned three 4A West Division Titles in 2009, 2011, and 2012, He is a Physical Education teacher at Concord Hill School, Chevy Chase, Maryland.