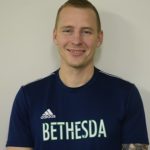 About Josh: Coach Kinnetz joined the BSC program in 2018 after a highly successful career in coaching at the high school level through the region. He started his coaching career as the Head Coach of the Watkins Mill Junior Varsity Girls High School team, a position he held from 2004-2005. In 2006 he was promoted to be the head coach of their varsity team, a position that he would hold until 2010. In 2011, he moved on to become the Head Coach of the Girls Soccer team at Northwest High School. In 2014, he would guide Northwest to their first-ever division title and appearance in the regional finals. In 2015, he made a consecutive regional final appearance.

In 2016 he would guide The Jaguars to their second division title and first-ever undefeated season. For his efforts, Josh was nominated for the MACS Coach of the Year. After a successful spell with Northwest Josh was named the Head Coach of Walter Johnson High School’s Girls Varsity Team in 2017, a position he still holds.

In addition to his experience in high school, he has also coached boys middle school soccer for 10 years in Montgomery County. At the club level, he was the U19 Girls Head Coach for OBGC Soccer Club from 2007-2008.

Josh currently holds a USSF National ‘C’ Coaches License, USC National Diploma, & USC Goalkeeping Level 1 Diploma. He played his college soccer at Maryville College in Tennessee where he also earned his Bachelor’s Degree in Political Science and History with a Secondary Teacher Licensure. He has a Master’s Degree in Education with a specialization in Literacy and Learning in the Content Area. He currently teaches Social Studies at Sherwood High School.