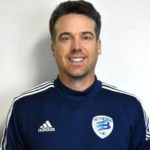 Jonathon has been instrumental in building Bethesda Soccer Club into one of the top player development programs in the country.  Jonathon began coaching at Bethesda SC coaching in their Youth Development Program in 2001. In 2006, he was named the Youth Development Director. In 2008, he was selected to be the first Boys Director of Coaching for Bethesda Soccer Club. In 2020, he was named Executive Director after serving as the club’s Technical Director for both the boys and girls programs for the 2019-2020 season. In his time at BSC, he has guided the club’s growth from 18 teams and 250 players to 51 teams and 1100 players.

In his tenure, the club has produced 32 Youth National Team Players, 2 US Men’s National Team Players and multiple MLS Draft Picks.  On the team level the club has won numerous State and Region I Championships along with sending several teams to Nationals. In 2012, Bethesda SC was selected to participate into the US Development Academy where the club has earned a berth in the playoffs on 5 different occasions, reaching the knockout rounds two times. Bethesda SC is the only Academy Program in the DMV area to have advanced to the knockout stages since 2012.

Personally, Jonathon started all four years of his college career. As a freshman, he played at Virginia Tech before he transferring to American University where he finished his college career. During his senior season at American University he helped lead the team to an NCAA Sweet 16 Appearance, defeating nationally-ranked Ohio State and #3 Wake Forest along the way, before losing to eventual National Champions UNC 2-1 in OT.