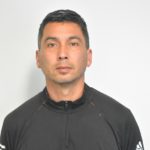 About Jerry: For over 15 years Coach McNeal has provided expert guidance and leadership to the BSC program. He has also previously served as an Assistant Coach for Colorado College and George Washington University.

In college, Jerry played all four years at the University of Colorado at Colorado Springs in Division II. At the professional level, Jerry featured for the Northern Virginia Royals (USL D3 Pro League), the Colorado Springs Ascent, and the Pikes Peak Stampede (both of the USL PDL), and German Ruckingen and 1893 Hanau in the German amateur league. He also featured for the U.S. Military National Team from 1991-1993 and played at the 1993 Military World Cup in Morocco.

He currently holds a USSF National ‘A’ Coaches License and an NSCAA Advanced National Diploma. He received his Bachelor’s Degree from the University of Colorado at Colorado Springs.