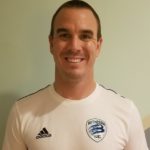 About Gary: Coach Burke is greatly influenced by his English heritage and shows his passion to help players develop in every training session. He wants to build confidence and nurture the ability of his players with a holistic approach to teaching. In addition to coaching with BSC. Gary manages SAM SELECT soccer league and EDP Future league based at the MD SoccerPlex. Additionally, Gary is a USSF licensed grassroots educator and teaches other coaches for MSYSA.

As a player, he represented England schoolboys at the U16 and U18 levels as well as having time at professional clubs Newcastle and Darlington before coming to America. Gary was given a soccer scholarship to Division I  St. Francis University, Pa. where he was a four-year starter and team captain. Gary continues to play competitively in the DC area.

Gary currently holds a USSF National ‘A’ License, a USC Premier Diploma, and a US Youth Soccer National Youth License. He earned his Bachelor’s Degree in Psychology from Saint Francis University with a double minor in Business Management and Business Administration.