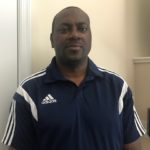 Festus George has been coaching for over 25 years. In that time he has developed some of the top players in the DC Metro area. A former professional player has taken his immense talent and brought it to the youth game where his teams are known for their technical prowess.