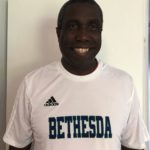 Ellis brings over 20 years of successful experience from a club, team, and player perspective. He was with Bethesda Soccer Club for 13 years now he returns for his 14th year, coaching two ECNL 1 teams and directing the College Advisory Program. Ellis has great experience coaching in the ECNL, he has successfully led several teams to Champions League playoff positions.

Coach Ellis Pierre has a long-distinguished career developing boys and girls in the National Capital area.  He served as the technical director for Maryland Rush Montgomery, boys and girls, and McLean youth soccer for younger boys. With over 25 years of experience in the game at the premier level, Ellis is known for attracting, developing, and retaining top-tier coaches and motivated players in the Washington, D.C., area. Ellis is also the associate head coach at Howard University. As a coach/trainer, he has successfully won more than a dozen state cups, multiple regional championships, and a Super Y national championship; effectively placed many players on the state, regional and national teams, and groomed numerous college-bound players who attended top academic and athletic programs.