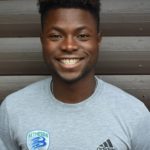 About Daniel: Daniel Akinkoye is entering his third season as a head coach at BSC.  A player Daniel played with the #1 nationally ranked Olney Rangers, Potomac U-16, and DC United’s U-18 academy. These club experiences allowed him to play with and against current professional players and exposed him to top NCAA D1 programs before landing home at American University. Daniel spent the past spring season training in Germany with professional club SC Paderborn and other German clubs. In addition to working at BSC, he also serves as a coach at Forza Soccer School. He has enjoyed coaching players from ages 5-14 at the Bullis Soccer Academy for the last 9 years and currently holds a USSF National ‘D’ Coaches License.