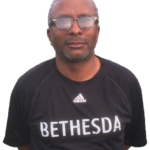 About Chris: Coach Morgan has worked at the BSC program since 2017 and currently holds a USSF National ‘A’ Coaches license. He is also currently pursuing his USSF National Youth License. He has over 15 years of coaching experience at the U9-U18 levels first with Pinecrest Premier Soccer Club in Miami, Florida, and now with BSC. He attended St. George’s College School in Jamaica and would enroll at American University where he received his BSBA and his MBA. Coach Morgan played semi-professional soccer with the Washington Mustangs and was a member of the Jamaican Men’s National Team.

In addition to working with BSC Coach Morgan is also the Director of Finance and Administration at the School of Professional and Extended Studies at American University.