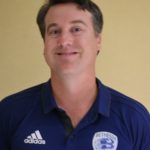 Colton has coached in BSC for over 17 years in which he has coached every age group from u8 to u19. Colton’s teams won numerous state cups & high-level tournaments before the Academy. Additionally served as the u17 & u19 Academy Coach for five years. During his tenure, he coached over 100 div 1 college players & has had several players who have gone on to play professionally. Colton now serves as the U12-U14 Age Group Director and currently coaches the U13 Academy Team.

In 2013, Colton’s AC Bethesda U18 Boys was noted as one of the top recruiting classes in the country.

As a player, Colton played soccer at American University (NCAA Division l) and anchored the defense to an NCAA Sweet 16 appearance his senior year. He played in the Washington Premier League where he captained the team at a scouted appearance in Agadir, Morocco.