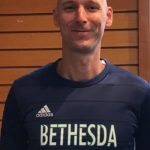 As a player, Brendan played college soccer at Macalester College in St. Paul, Minnesota, where he was a Division III First-Team All-American and MIAC Player of the Year in 2001, All-Region selection from 2000 – 2001, and First-Team All MIAC selection from 1999 – 2001. Brendan captained Macalester his Senior year and was a starter all four years while Macalester claimed three conference championships and played in the NCAA national tournament.

Brendan played youth soccer in Virginia for the Braddock Road Youth Club and Springfield Youth Club and he was a four-time state champion. He also captained the WT Woodson Cavaliers his Senior year and earned All-Met honorable mention. Brendan has experience coaching at the youth level for the Minnesota Youth Soccer Association, Middle States Soccer Camps, and as a Peace Corps volunteer in Honduras. He also has 16+ years of professional experience coaching and mentoring teams in a business setting and he is a strong advocate for applying lessons from team sports to personal, academic, and professional settings.