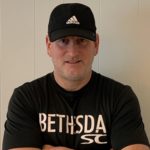 About Bill: Coach Moravek currently serves as an official US Academy Scout for Fulham FC, in England’s Championship and has been with the club since 2011. He lived in London for nearly five years as well, where both his sons played in Fulham’s academy program, during that time frame. His oldest son currently plays soccer at The United States Air Force Academy in Colorado Springs, Colorado.

Before his work with Fulham, Moravek lived in Fareham, England where he was an official scout for the English Premiership side, Southampton FC from 2003-2005, and was an academy coach for them from 2001-2003. In his time as an academy coach with Southampton, he was fortunate to coach the likes of Gareth Bale of Real Madrid and Nathan Dyer among others. In addition, he worked as an apprentice with the first team under Gordon Strachan who is the former manager of Scotland’s National Team as well as reserve team manager and former England U21 National Team Coach Steve Wigley. He has also worked with Huw Jennings who was the Academy Director at Southampton FC and is currently the Academy Director at Fulham FC and Malcolm Elias, who is the current head of Talent ID at Fulham FC and prior, was the head of Talent ID at Liverpool FC and Southampton FC.

In 2003, Moravek served as the assistant coach for the Jamaican Men’s National Team under Technical Director Carl Brown and Assistant Technical Director Peter Cargill (also Jamaica’s Captain in the 1998 Word Cup), living in Constant Spring, Kingston, which saw him in action against the USA, Nigeria, Paraguay, Cuba, and Brazil Select. He was also an assistant for their Olympic U23s, U20s, and U17s sides. In 2000-2001, Moravek was the head national team coach for the British Virgin Islands and Seba United FC(Currently Montego Bay United)in Jamaica’s Premier Division. His British Virgin Island squad won the Western Union Cup, beating Antigua in the final, in 2000.

He has also coached with the professional side of Maryland Mania of the USL and was an assistant coach at college sides, NCAA Division 1, Longwood University, NCAA Division 2 Shepherd University, and was a Volunteer Assistant at NCAA Division 1, Howard University. In addition, Moravek has also coached with both Virginia and Maryland ODP programs. He has also coached high school in the US, serving as Varsity Head Coach for Notre Dame Academy’s Boys and Girls Teams in Virginia, where his teams won the conference title both years and he was named conference coach each year. He was also the founder and Technical Director of Moravek Soccer School which, for over 20 years, conducted a variety of very successful summer day/residential camps for both boys and girls as well as tots programs and numerous other programs thru out the year. The programs, which were conducted thru Loudoun County Park and Recreation as well as Frostburg State University, had over 1000 participants in attendance, annually.

Moravek has been with Bethesda in a variety of roles since 2008, having served as a coach with all levels and ages of teams. His teams have won numerous tournaments and league titles, including NCSL, Pre-Academy as well as finishing high up in the Academy/MLS Next Leagues, among others. His Academy Teams have consistently ranked near the top statistically with the fewest goals allowed and most goals scored and qualified for playoffs each year, narrowly missing the National Quarterfinals in each of those years. In 2019, his U14 Boys Super Y League team won the National Championship going undefeated throughout the entire season.

Bill was a scholarship athlete for Clemson University’s 1987 National Championship and 1988 World Collegiate winning teams. In addition, he was a member of Clemson’s Gator Bowl-winning football team from 1989-1990. He currently holds a USSF “A” coaches license, which he has held since 1999.