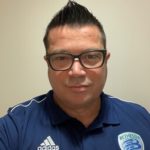 Jason has been coaching soccer for over 35 years. He currently coaches the 2007 U14 Girls Olympic Developmental Program (ODP) team. He has served as the Head Coach at Potomac Soccer for 1999, 2002, 2003, and 2008 Girls teams over the past 8 years, resulting in 15 Tournament Championships including the 2019 MSYSA Presidents Cup State Championship. Jason also served as Head Coach with both Rockville and Gaithersburg High School Varsity Girls Soccer teams.

Before and during coaching, he played travel soccer in Florida for the Jacksonville Jaguars and Beaches Soccer Kyx as well as 1 year of college at Florida State College at Jacksonville. While in Europe for 17 years, he played for several teams (SV Ramsthal, TV Jahn 1895, 1FC Schweinfurt 05, and DJK Seugast) in Germany making it to the Regionalliga.

He currently holds a USSF ‘C’ License and a Bachelor’s Degree in Business Administration from the University of Maryland University College.