High level coaches and elite  youth soccer players join forces with children with
physical and developmental disabilities to improve their soccer skills and to share in  the love of the game.

High level coaches and elite youth soccer players join forces with children with physical and developmental disabilities to improve their soccer skills and to share in the love of the game.

At the start of the two-hour per day camp week, each camper will be assessed by our coaches.  The campers will then be broken into smaller groups and paired with volunteers or “buddies” for specific skills instruction. It is our coaches and youth volunteers’ objective to help each camper grow and improve their soccer skills over the course of the week, regardless of the camper’s starting skill level. The emphasis of the program is to have fun but we are also serious about teaching soccer.

This summer, Bethesda Soccer Club has donated the turf field at Thomas S. Wootton High School (Rockville, MD)! We thank the club for their generous support! The camp is free and will take place from June 17-21, 2019 at Wootton HS. We ask that all campers arrive at camp 15 minutes early and that parents and/or guardians remain at the field during the training sessions.

Each camper will be given a camp T-shirt at the start of the one-week camp and we will distribute a certificate and awards to our campers at the end of the week!  We’re looking forward to an exciting camp! We hope your child will join us!

Please remember to arrive at camp 15 minutes early and bring plenty of water! 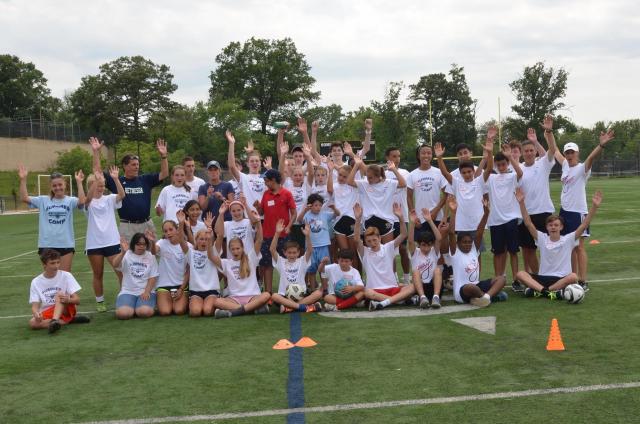 BSC Buddy Camp was founded in 2013 by Jacob Cohen, a travel soccer player from Philadelphia, PA. When volunteering at the Variety Club of Philadelphia, Jacob observed that many of the children he was working with demonstrated a real enjoyment of the game of soccer and felt that, like him, these kids would likely enjoy the opportunity to receive more specialized training. At the same time he felt that many of his soccer friends would gain a great deal of satisfaction and enjoyment out of helping other kids. With the help of the Ukranian Nationals Soccer Club, the Eastern Pennsylvania Youth Soccer Association, and many of his teammates as volunteers, Jacob was able to create Jacob’s Camp.

After three successful summers of holding camp, Jacob looked to expand to the Washington, DC metro area. When contacting some family friends in DC, Jacob was connected to Hale Lieberman, a soccer player who, like Jacob, was 15 years old at the time. Hale had volunteered with Special Olympics in the past, and thought that the camp was an awesome idea. He brought the idea to the staff of Bethesda Soccer Club who were generous enough to offer sponsorship of the camp. From 2016 to 2018, Jacob and Hale held camp in both Philadelphia and Bethesda.

In the fall of 2018, both Hale and Jacob left home to begin their first semesters of college. In anticipation of their busy schedules in summers to come, they decided to pass management of the camp over to Bethesda Soccer Club and step down into remote advisory roles. In 2019, the camp was renamed BSC Buddy Camp, and Bethesda Soccer Club began their transition to management. Hale will still serve as director for the 2019 camp, but will take on a remote advisory role in future summers.

-Registration for Summer 2019 is now open!

-Campers must be between 8 and 21 years old.

-BSC Buddy Camp is run by volunteers and is free to those attending!

-This is not a drop-off/pick-up program. A parent must stay with their child for the entire session.

-We will have a buddy system  (one volunteer for each child)

-We will have coaches and assistant coaches to organize the sessions.

-The child will be placed in groups according to their ability, not their age.