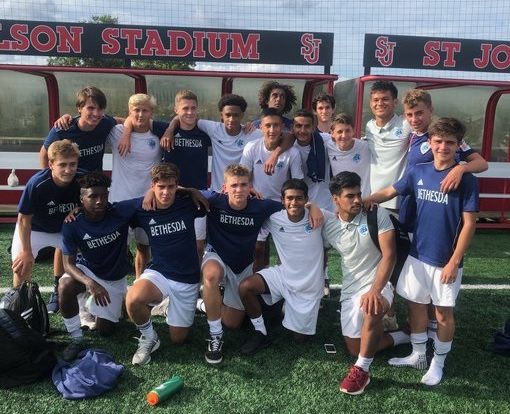 What is the United States Soccer Development Academy?

The United States Soccer Development Academy (USSDA) is a partnership between U.S. Soccer and the top youth clubs around the country to provide the best youth players in the U.S. with an every day environment designed to produce the next generation of National Team players. The Academy’s programming philosophy of increased training, less total games and more competitive games is based on U.S. Soccer’s Best Practices utilized by the U-17 U.S. National Team Residency program.

The Development Academy is also focused on identifying and developing the next generation of elite referees. U.S. Soccer assigns up-and-coming officials to participate in Academy games at the local level and at national events.

Who oversees the Bethesda Academy ?

The Academy Program is run by our Older Boys Director Matt Ney.

How many days per week will the USSDA train?

USSDA teams will train a total of 4 days per week. Players are expected to attend all practices to be considered for competition in games.

How many games are played and how long is the Academy season?

Each Academy club plays approximately 30 league games, including 6 games played at Showcases. The season begins in September and commences with Finals Week in July.

How many players are selected per team?

Each team will select between 18-22 players for the given year.

How do Development Academy players get exposure to US National teams?

US Soccer Training Centers are sessions that are hosted every few months in various locations where National Team coaches train & identify players. US Soccer Training Centers will replace ODP (USYS) sessions and zero costs are associated for players who are invited to attend these sessions.  US Soccer scouts attend the majority of divisional games to identify players for National team camps & US Training centers.

WHAT ABOUT COLLEGE EXPOSURE?

Bethesda SC players undoubtedly receive the best college exposure of any club in the country, with players attending some of the top local and national Showcase events in the country, including our own Bethesda Premier Cup. Bethesda Soccer Club has a long and storied history of creating a pathway for our players to college which you can read more about here.

In addition Bethesda SC is partners with SportsRecruits, a college recruiting software that is designed by former college athletes for the next generation of players. All BSC U15-U19 players will receive a complimentary SportsRecruits account with full access to their software including resources, webinars, and messaging.

HOW MANY BETHESDA SC PLAYERS HAVE GONE ON TO DIVISION I COLLEGE PROGRAMS?

Over the past 20 years, Bethesda SC have had over 500 players go on to play Division I soccer and many other players going on to play in Division II and Division III. To see where alumni have ended up on and off of the pitch please go to our Alumni page. If you want to learn more about our Pathway to College please check out our college resources page.

HOW MANY BETHESDA SC PLAYERS HAVE GONE ON TO Play COLLEGE sOCCER?

Over the past 20 years, Bethesda SC have had over 500 players go on to play Division I, Division II, and Division III college soccer. To see where alumni have ended up on and off of the pitch please go to our Alumni page. If you want to learn more about our Pathway to College please check out our college resources page.

How often are Academy clubs required to travel?

Academy clubs can expect 15-20 away matches in a given season, some of which will require overnight travel. Exact travel distances will vary depending on their geographic proximity to their opponents and Academy events.

Can Academy players participate with non-Academy teams during the season?

Full-time Academy players are only permitted to participate on their Academy team and National Team duty. Players who play for a USSDA team cannot play for their high school team. Academy players will practice with and scrimmage against non-Academy Bethesda teams throughout the season.

Does the USSDA Offer Scholarships?

The Scholarship Program is a joint venture between the U.S. Soccer Federation and the U.S. Soccer Foundation to help Academy clubs and players move away from the pay-to-play model of soccer. For more information on deadlines, the application process, eligibility and program requirement click here.

Yes. Bethesda Soccer Club is one of the few travel soccer clubs across the country that offers need-based scholarship to players to help offset registration fees and costs. To learn more about our Scholarship Program and key deadlines click here.

Who will coach the teams?

Here are the coaches for Bethesda’s Academy program for the 2019/2020 season:

Where will the Academy Teams train?

Currently the Academy teams divide their practice time between Richard Montgomery High School and Wootton High School. Both sites are turf which allow our teams to train even during inclement weather.

How do I try out for an Academy Team?

For general tryout information please go to our tryout page.