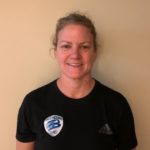 Coach Keiller has been coaching the varsity girls’ team at Quince Orchard since 1999, compiling a 223-86-9 record over 21 years. During that span, the Cougars have participated in ten region finals, winning six, and four state finals, capturing the Maryland 4A state championship twice (2002, 2007). The past two seasons, the Cougars have amassed a 23-4 record, allowing only 15 goals in two years. While at QO, Keiller has won numerous County, Met, State, and Region Coach of the Year Honors. She currently holds a Level 1 and Level 2 Goalkeeping Diplomas from the United Soccer Coaches (formerly the NSCAA).

As a player, she played goalkeeper at the College of the Holy Cross, where she was selected Patriot League MVP and was twice named All Patriot League. She holds the Patriot League record for saves in a game, and was the league’s save leader in the ’91 and ’92 seasons. Keiller continued her playing career with the Maryland Pride of the USL’s W-League. With the Pride, Keiller went to the W-League national finals in 1999 and 2001.

In addition to her work at QO, Keiller serves as the President of the Maryland Association of Coaches of Soccer (MACS). Previous to her stint at Quince Orchard, Keiller served three years as an assistant coach/goalkeeper trainer at the college level, at St. Joseph’s College (IN) and Western Michigan University. Keiller has also coached within the Bethesda program previously having coached the Freedom (91/92) to the 2005 Maryland State Cup championship.