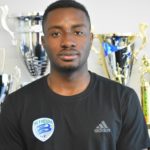 About Michael: Coach Akinkoye returns to the BSC program as a Head Coach after an extensive playing career in college and at the professional level.

As a player, Michael grew up in the Bethesda program and was a member of the Rangers side that went undefeated and won the US Youth Soccer Regional Championship in 2012-2013. He would go on to play college soccer at James Madison University and at Saint Joseph’s University, where he was named to the Philadelphia Soccer Six All-Rookie Team in 2015. As a student-athlete in 2015, he was named to the Athletic Director’s Honor Roll and given the Dorie Leahy Award for the loyalty and dedication that he showed to his team. He was also a member of the Fellowship of Christian Athletes.

After college Michael would go on to professionally for Evergreen FC in the Premier Development League and Christos FC, for who he currently plays. He has played for Potomac’s U-23 CCL team and was invited to train with MFM FC  in the Nigerian Premier League.

As a coach he has previously worked as an Assistant Coach at Shenandoah Valley United and as a Soccer Camp Counselor at the Bullis School. He has also worked at summer camps for both SMU and JMU.