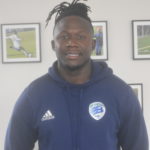 About Lester: Coach Dewee returned to BSC four years ago after a distinguished playing career for both club and country. After growing up in the Bethesda system he would go on to play youth soccer with D.C. United, Bordeaux and Marseille. His youth teams won four Maryland State Cups and was a two-time Regional Champion. While at the Marseille Academy his side won the U16 Ligue title.

At the senior club level he played professionally in Sweden for Angelholms FF, Bodens BBK, and Hoganas BK and had trials with Lille, Rennes, PSG, St. Etienne, FC Metz, AC Monaco, Crystal Palace, and Newcastle United. He has been capped for the United States Youth and Men’s National Team at the U-14, U-15, U-17, and U-20 age levels.

Lester currently holds a USSF National ‘D’ Coaches License and will obtain his ‘C’ License in August. He is also the owner of PrimeTime Training and FunTime Training. In addition, he is currently attending college at the University of Maryland where he is pursuing a Bachelor’s Degree in Business Administration.