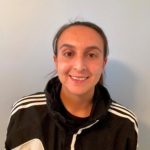 Erica is a Bethesda Soccer Club alum and was a four-year starter for the varsity soccer team at The Bullis School, earning all-league honors her senior year. After Bullis, she spent time playing for Trinity College in Hartford, CT at the Division III level before deciding to focus on my studies. Erica is currently the head coach for the JV team at Walt Whitman High School for the past 4 seasons. Before Whitman, she was the assistant JV coach at Bullis for 2 seasons. In addition to coaching high school soccer, she has coached with Arrington Training and Development (ATD) since 2015, where she has worked with teams of all ages and skill levels. While working with ATD she was the head coach for two MSI teams and the assistant coach for two Maryland Rush teams. She currently holds her F, E, and D licenses through US Soccer and is an accredited interscholastic coach through NFHS.